Primary Sport Wellington has again partnered up with Capital Football and is pleased to advise that the FUTSAL Festivals will be offered to the PSW membership in 2022.

However for the 2022 offerings there is two important differences:

Firstly, thanks to the generosity of Pelorus Trust who have agreed to fund the court hire costs associated with holding the FUTSAL Festivals at ASB Stadium.

It is hoped the additional day and the removal of the $25 per team registration fee will negate any schools from being able to participate in this extrremely popular event.

The PSW/Capital Football FUTSAL Festivals will be offered over the following three days:

Information will be emailed to the PSW membership schools at the beginning of Term 3.  School's are advised to keep an eye out for the information as history demonstrates that registrations have to be closed within 5 days of schools receiving the information.  *Schools MUST be 2022 finanical members of PSW to be able to register and participte in these FUTSL Festivals.

Primary Sport Wellington and Capital Football offered and successfully organised the PSW / Capital Football FUTSAL Festivals on Tuesday 7th and Wednesday 8th April.  29 schools and 250 teams registered for the 2 day offering and these FUTSAL Festivals are proving to be extremely popular with the PSW membership with the closing of team registations process within 5 days of promotion.

Unfortunately in light of the Prime Minister's announcement on Tues 17th March and the government directive to cancel all public gatherings involving 500+ people a decision has been made to cancel both FUTSAL Festivals for 2020.

This decison is necessitated to help with the prevention and spread of the COVID-19 virus.

Primary Sport Wellington is pleased to partner up with Capital Football for the third year in a row to offer 2 FUTSAL festival opportunities to it's membership.  Thank you to the member schools both FUTSAL Festival opportunities have now CLOSED and I am expecting 250 teams over the two days to part take in this opportunity.

All 12 courts have been booked with a staggering 22 rounds of play per court.  In order to get through the number of rounds teams will need to be ready to take to the court on time as the clock will commence regardless.

First round games will commence promptly at 10am please ensure teams are here for the scheduled briefing and ready to take their respective court on time.

Well done to the PSW membership schools, in total 237 teams have registered from 28 PSW schools for this years 2019 PSW/Capital Football FUTSAL Festivals.

The unofficial feedback received from coaches, teachers, parents and attendees from both FUTSAL Festival offerings were the futsal festivals were an enjoyable experience with most teams playing at least six 10 minute games through out the days.  There was a range of skills and abilities observed throughout the day from seasoned futsal players to the first time players.  Seeing the children's improvement and understanding of the game as the day progressed was a wonderful thing to see.

NB A more formal survey will be sent to all schools  as well as where your children can play in FUTSAL leagues around Wellington's facilities.

Unfortunately St Brigid's School were unable to field their 5 teams registered in the Year 7 & 8 grades, due to not being able to book a bus or organise parent transport.

Approximately 1,500 children participated in two Futsal festivals held at ASB Stadium in Kilbirnie.  These tournaments were organised by PSW and Capital Football and proved to be very popular with attendees as the excitment level was maintained throughout the day by the children with some exceptional skill level observed at ALL grade levels.

Teams played between 7-9 games throughout the day and the children still had plenty of energy to burn at this world class venue.

Garry Szeto says "This is the first event that was opened up to children in it's member schools for Year 1 -3 students and many schools siezed the opportunity entering whole classes and syndicates.  The atmosphere over both tournaments was fabulous and the skill level exceptional.  Verbal feedback received from adults and children alike was overwhelming positive and I hope these children go onto play in the Futsal Leagues on offer in terms 2, 3 and 4.  I can not thank the team at Capital Football enough for their support and organisation extended to PSW o ensure the children received a quality sporting experience and I intend to make this a regular sporting fixture on the PSW calendar moving forward".

PSW is pleased to announce it has partnered up wtih Capital Football this year and is offering two FUTSAL tournaments at ASB Stadium, Kilbirnie.

EOI has closed and I have received the following team entries for the two tournaments on offer.

32 team entries for the Year 7 & 8 grades spread across mixed, boys only and girls only sections.

Garry Szeto says "I'm very pleased with the interest from PSW member schools to take part in this Futsal Festival, 166 teams across two tournaments is a fantastic result given how busy term 1 is with school camps and other sporting opportunities on offer.  I am really looking forward in particular to seeing the Year 1-3 students in action as this is not normally an age range that PSW has catered for in the past".

Due to refurbishment at Wakefield Park scheduled term 1, no PSW Football Tournament will be organised this year.

Two of the grades played on the artificial turf (Years 7 & 8 Girls and Year 8 Mixed) while the Year 7 Mixed grade played on the grass fields.

Over 300 Year 7 & 8 students arrived at Wakefield Park to participate in this football tournament.  The weather conditons upon arrival could not have been more perfect any outdoor sporting activity, no wind and high cloud but as the day progressed conditions got colder.

Garry Szeto event orgaiser says "Due to the fact that I needed to split the full football fields into two pitches per grade, as opposed to four,  as the players were bigger and faster then  from the previous tournament organised for Year 5 & 6's, meant there were a few more challenges presented with the organisation of the tournament.  The main one being I needed to find four larger sized goals suitable for this age group.  Solution came from Wellington City Council Push Play equipment where I hired four inflatable goals. Unfortunately one of the goals had a faulty valve which meant either a teacher/parent or more often then not the goalie had to keep on the goal they were defending and pump it up before it collapsed on them.  The same changes that were made for the Year 5 & 6 tournament i.e. no cross overs or finals were implemented for this tournament, again leading to a more relaxed tournament with pleny of skilled football games observed.  Thank you for another great day of football and an entertaining day of sport."

For game results click on the SportsRunner icon top right corner of the screen.

Garry Szeto event organiser says: "There were changes made to this years tournament.  The most notable change was a decision made to not hold cross overs or finals.  I believe this made the tournament a more enjoyable sporting experience overall for the children that played as the results was not the be all and end all and games played were highly competitive but more relaxed atmosphere.  Having all games played on the artificial turf fields also made the management of the tournament a lot easier to find the teams that arrived late to their games."

This tournament would not have occured without the support of Capital Football who organised the draw, supplied match footballs for each field and Island Bay United Junior Football Club who allowed us the use of the junior goals for the day.  And of course the teachers and parents who entered and organised the teams for this tournament.

Well done everyone for contributing to an enjoyable day of sport.

The Years 4-6 Football Tournament was held in near perfect conditions on 12 April 2011 . Because of the redevelopment of Wakefield Park, this tournament was held at MacAlister Park and as there were 63 teams in the various grades, both the upper and lower fields were used

Many thanks to Mark Legget from Roseneath School for running the upper field competition; Emma Humphries from Capital Football for her assistance with the smooth running of the tournament; Tom Randles from Capital Football and the staff from  Wellington City Council for their assistance with the setting up of the park; Jamie Milne and Island bay Junior Football Club for supplying the goals,  the referees and team managers for their guidance of the teams both on and off the field and lastly the teams for showing good skills and sportsmanship throughout the day.

Congratulations to all those teams who triumphed to win their grades after some very closely fought  games.

The two Capital Football / PSW Football tournaments for Years 4 - 6 and Years 7 & 8 were held on the 27 April and 4 May, respectively. Unlike last year, the weather was good for both tournaments and the grounds dry, if not a little too hard for this time of the year. A total of 87 teams competed over the two days and  after many hard fought games, the following teams emerged as the grade winners.

Our thanks to all those who made this tournaments possible, Capital Football, lsland Bay Junior Football Club,Wellington City Council, team managers, referees as well as the players. 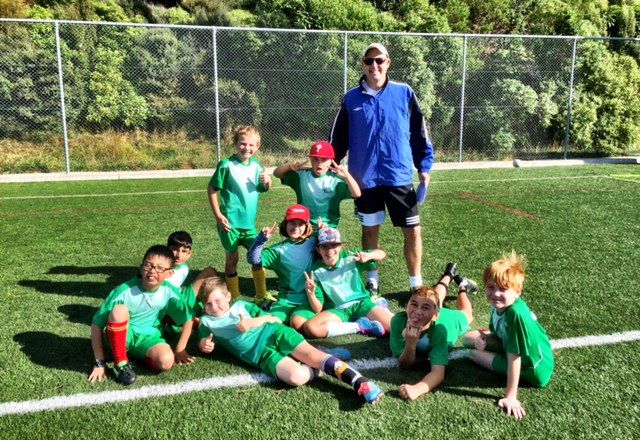